A near-native of Melbourne, Australia, Vaughan McAlley has spent his now-long career developing expertise in many aspects of music, including choral music, instrumental and orchestral music, conducting, singing, and composing. He is a long-time member of Ensemble Gombert, and is a principal tenor in the choir of Scots’ Church in Melbourne.

His love of renaissance music has influenced his compositions, which explore the expressive capabilities of musical counterpoint. His motet Omnes angeli is the first fully-polyphonic 40-part motet since Spem in alium (1570) by Thomas Tallis. Other major works from the last decade include A Human Requiem, a setting for a cappella choir of the biblical passages Johannes Brahms chose for his German Requiem, Lamentations for 5-part choir, and a string quartet.

In 2019 he released an album, Music from 4 to 40 parts with Move Records. It is available from the iTunes Music Store, on Spotify, or as a CD from Buywell Music or the Australian Music Centre.

This string quartet began with a desire to write an In nomine, a popular instrumental form from the sixteenth century. At that time it became popular to write music for viol consort based on the meane (ie. alto) part from the In nomine section of John Taverner’s Missa Gloria Tibi Trinitas. With this idea, I proceeded to complete a movement for string quartet in a few days, a very short time frame for me.

With what seemed like quite a good movement completed, I decided to make the In nomine the first movement of a full-blown string quartet. Shortly afterwards my first child was born, and the subsequent three movements took another two years to complete!

The first movement is a classic In nomine movement, with John Taverner’s cantus firmus appearing in the second violin, with the other parts weaving harmony around it.

The second movement is a scherzo with trios. The scherzo is in sonata form, and is interrupted by four “trios”, each a variation using a different set of three players drawn from the quartet.

The third movement is a slow set of variations, and uses the rare (for me) compositional device of silence, which is slowly filled in over the variations. The Flinders Quartet played it in 2016 as part of their inaugural Composer Development Program concert (listen here).

The final movement is a lively set of variations with intricate polyphony. As a tribute to my elder daughter Eleanor, it is exactly 2013 semiquavers long, and so tightly constructed that correcting consecutive octaves in one place required rewriting nine different places in the score. All this may appear dry, but the movement is joyful and would make a great spectacle to watch.

Undeterred by a disastrous performance of my first song at a school camp, I have been composing in earnest since 1984. In 2000 I settled on an idiom that allowed me to fully indulge my enthusiasm for the expressive possibilities of counterpoint. Here is a incomplete list of my music. You may also find complementary information on my page at the Australian Music Centre.

I have a number of exciting hymn arrangements. They have been performed over the years at Scots’ Church on Easter morning and at “Big Hymn Sings”. I am intending to put them all into the shop, but if you are interested, let me know, and we should be able to come to an arrangement.

The following arrangements are for choir, congregation, brass quintet (2 trumpets, horn, trombone and tuba) and timpani:

This arrangement is for the same ensemble, but without the tuba:

This arrangement is for clarinet, organ, and pandemic-sized choir:

Vaughan McAlley briefly studied flute at the University of Melbourne
with Prudence Davis before specialising in Composition under Brenton
Broadstock. Since joining the chamber choir Ensemble Gombert in 1999
he has composed primarily choral music, exploring the potential of the
relatively strict rules of renaissance counterpoint combined with just
intonation, a typically choral method of tuning. Major works include
the 3rd Sinfonietta for orchestra (2003), Missa Caelestis for choir
(2003), Veritas de terra orta est for choir (2005-2009), Four Chorale
Preludes in Mass Form for piano (2008), written for Michael Kieran
Harvey, Chaconne for double string orchestra (2009), and Lamentations
for choir (2012). Ensemble Gombert has performed Missa Caelestis in
2007, and Veritas de terra orta est in 2009, both recorded by ABC
Classic-FM.

For his fortieth birthday party in 2010, Vaughan organised
a performance of Thomas Tallis’ Spem in alium, and presented the first
section of his own forty-part motet, Omnes angeli. Omnes angeli was
completed late in 2012, and was performed on 26 October 2013 at The
Dome, 333 Collins Street Melbourne by Ensemble Gombert, conducted by John
O’Donnell.

Since then he has written a String Quartet (2016), To
Rosamounde (2015), a balade with words by Geoffrey Chaucer, and A Human
Requiem (2019) for a cappella choir. His album Music for 4 to 40
parts was released in August 2019, and contains many of the pieces mentioned
above.

Vaughan is a principal tenor at Scots Church in Melbourne. He married Leonie Tonkin in 2007 and they now has two excellent daughters. He also enjoys the gym, sauna culture, extracting a good espresso, and computer programming.

And all the angels stood round about the throne, and about the elders and the four beasts, and fell before the throne on their faces, and worshipped God, saying, Amen: Blessing, and glory, and wisdom, and thanksgiving, and honour, and power, and might, be unto our God for ever and ever. Amen.

Omnes angeli was premiered on 26 October 2013, in a concert at The Dome, 333 Collins Street, Melbourne. John O’Donnell conducted Ensemble Gombert, together with guest singers:

I wrote the following notes for the program:

From a technical point of view, writing music in forty parts is like writing a novel with forty main characters—ones needs a very good way of keeping track of everything. It is also an enormous canvas, requiring a suitably grand subject. I was partly inspired by the near-death experience described a non-musical Baptist pastor. In his experience of Heaven he described numerous angels all singing different lines but harmonising together, a beautiful scene for theists and humanists alike. As a text I chose the scene of angels, elders and animals worshipping the Lamb from the Book of Revelation.

A forty-part choir allows gigantic and spectacular tuttis, but also many different combinations of smaller groups. Omnes angeli is written for ten four-part choirs, all with different voicings (except for choirs 4 and 5), and which are arranged in a semicircle. The higher voices of sopranos and altos are on the outside edges, whereas the middle choirs are a rich ensemble of tenors, baritones and basses. From each end of the semicircle, the two highest sopranos call and answer “one to another” like the Seraphim from the book of Isaiah (6:2-3).

In the middle section, every part sings the breathless phrase “Blessing, and glory, and wisdom, and thanksgiving, and honour, and power, and might, be unto our God for ever and ever”. This phrase is begun by the men of Choir 6, gradually works its way around the the high voices of Choir 10, jumps to Choir 1, and progresses around the semicircle until it reaches Choir 5. Choir 5 finishes the acclamation, but is mostly drowned out by a huge tutti Amen that is the climax of the whole work. As Tallis learned, having each of forty parts enter one after another will occupy a significant proportion of one’s piece! 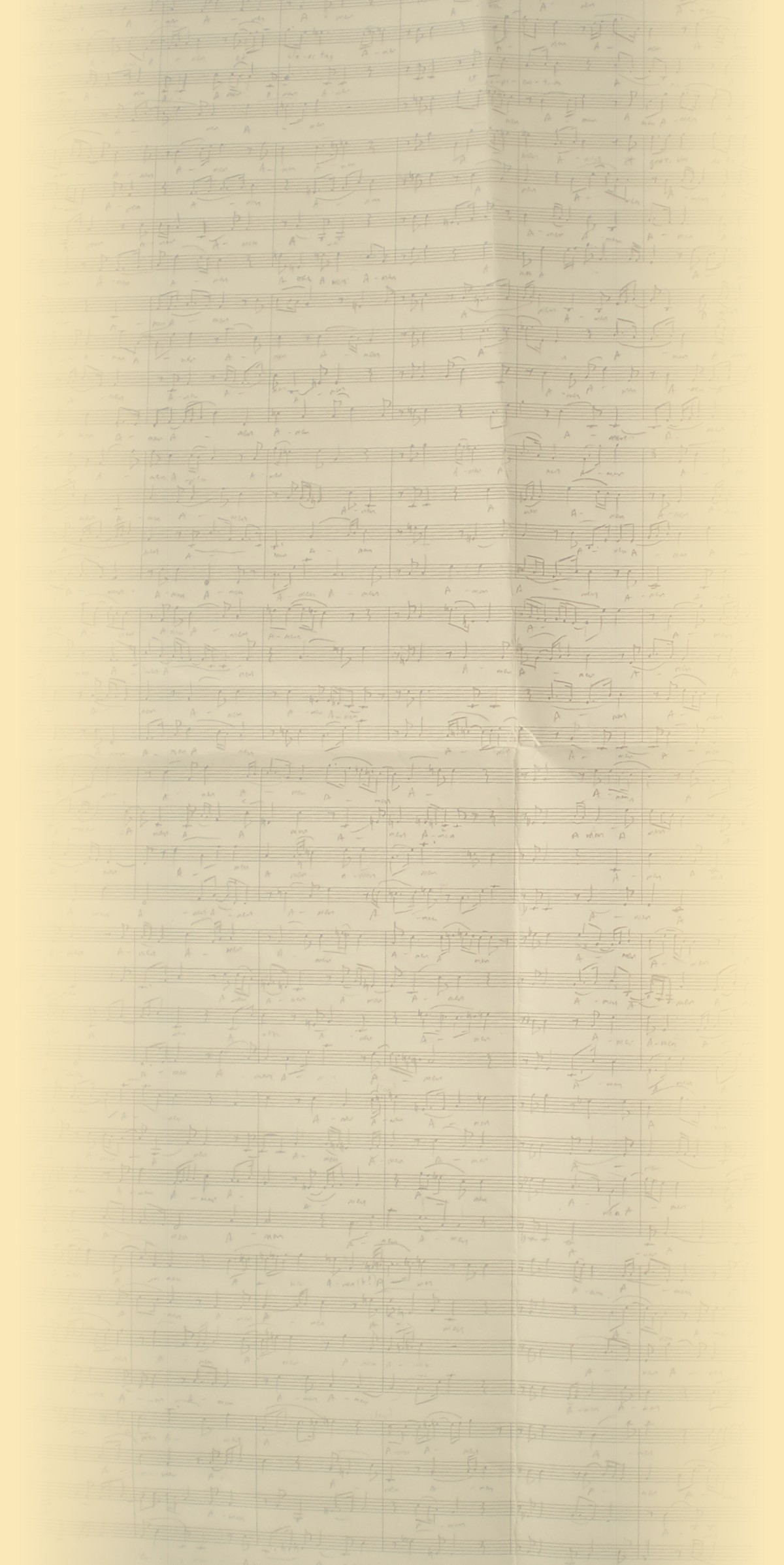